What’s going on with railroads in 2020, and why they could outperform if the economy recovers.

Shares of West Coast railroad Union Pacific (NYSE:UNP) fell 11.7% in March, according to data provided by S&P Global Market Intelligence. There are no prizes for guessing the reason: The railroads are the veins and arteries of the U.S. economy, so when activity is impaired because of the measures taken to contain the COVID-19 pandemic, the railroads are going to see a major effect on their revenue. 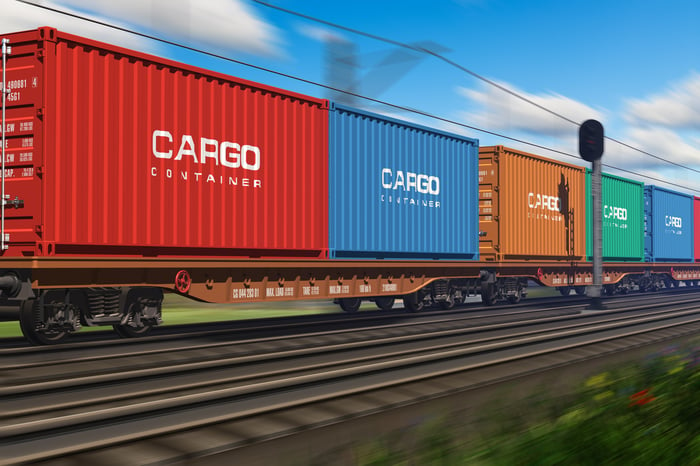 Indeed, a look at a chart of the share price performance of the Class 1 railroads listed on the market shows how the sector has pretty much moved down in sync with the S&P 500 in 2020.

It’s altogether a different story from just a couple of months ago, when railroad stocks were doing well on a year-to-date basis. Indeed, hopes were high that the industrial economy, and consequently railroads, would see an improvement in the second half of 2020.

In addition, even though the industrial economy wasn’t in great shape at the start of 2020, the major U.S. listed railroads, namely Union Pacific, CSX, Kansas City Southern, and Norfolk Southern, were all forecasting that their operating ratio (OR) would fall in 2020. For reference, the OR is simply operating expenses divided by revenue; a lower number is better.

This was a positive sign, because if the OR can drop in bad times, it’s likely that a recovery in the industrial economy could lead to an even bigger decrease — good news for the bottom line of railroads.

For reference, Union Pacific was predicting a lower OR in 2020 and carload volumes to be slightly positive in 2020. But clearly all bets are off in terms of guidance for 2020 due to the impact of the coronavirus.

John Gray, the Association of American Railroads senior vice president, said in the latest rail traffic data release, “Rail traffic numbers confirm that the coronavirus is taking a toll on the economy.” In fact, in the last week of March, total intermodal carload traffic was down 14.2% on a year-over-year basis, with motor vehicles and parts carloads down a whopping 69.5%. Total carload traffic declined 11.8%.

On a more positive note, Gray also noted that “total movements for the five railroads serving the West Coast ports remained steady for a fifth consecutive week, reinforcing the expectation that we may have seen the bottoming of the Asia-North America trade.” That would be good news for a railroad with a West Coast focus like Union Pacific.

By Lee Samaha for fool.com